Veterans Have Opportunities in Manufacturing Jobs 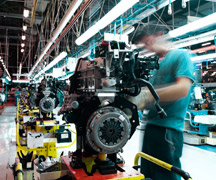 Job opportunities for veterans in the manufacturing sector should be abundant in the coming years, with a joint plan from four American companies helping to fuel that growth.

Alcoa, Boeing, General Electric and Lockheed Martin are all buying into the "Get Skills to Work Coalition,” an organization designed to educate job seekers on techniques in the modern manufacturing industry, with a target of helping more than 15,000 veterans.

Manufacturing employment has been one of the highest growth sectors in the economy over the past two years, according to the U.S. Bureau of Labor Statistics (BLS). To be sure, an estimated two million workers were laid off or left the sector at the outset of the recession, accounting for 20% of the estimated manufacturing jobs lost in the U.S. since 2000. But employers are on a gradual road back to revitalizing an industry that has an estimated 600,000 unfilled positions. These are high paying jobs, too, in some regions offering an average of $89,000 in annual wages.

Veterans re-entering the workforce after enlistment are vital to that growth, say recruiters, but they must meet the changing demands of manufacturing employers. Educational opportunities, such as the Get Skills to Work Coalition, can help them bridge any perceived skills gap, especially technological.

Many employers are less able to provide on-the-job training, so recruiters say they focus on finding new hires already knowledgeable about equipment advancements. Thus, training provided in skills courses like those the Coalition will fund is essential.

Industrial machinery mechanic, for example, is a career option expected to grow quickly as American companies invest more in domestic manufacturing. Welding also has high-growth potential, with one estimate suggesting there could be as many as three million new job opportunities by 2015, the result of less investment in Chinese manufacturing and baby boomers going into retirement.

An influx of manufacturing jobs is an attractive proposition not only for the military community, but for communities in general. Towns are making their pitches for these jobs to bolster their economies, such as the Hampton Roads-Norfolk-Virginia Beach metropolitan area. The nearby Norfolk Navy Base, hub of the U.S. Navy Atlantic Fleet, gives the area a high concentration of enlisted persons and veterans from which to choose.

Green technology is expected to account for other opportunities in manufacturing that were previously unavailable in the labor force. The Department of Veterans Affairs established a program exclusively to meet growing clean technology demand called Green to Green, which is just one indication that renewable energy is a growing career field worth investigating.