Military Experience On The Job Market 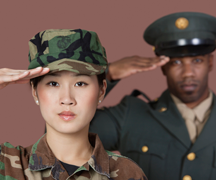 "If a man does his best, what else is there?" --General George C. Patton

Many of you moved a lot (some move every year for 20 years).

You deployed to various worldwide locations to protect our freedoms (leaving behind spouses and children). You shopped in PX/BXs and commissaries, and you frequently saw those you knew at the same medical clinics, schools, places of worship, and restaurants, on bases.

The world becomes small for service members, as you often reconnect in new worldwide locations.

Leaving this culture is difficult for some service members - you are not just leaving a job, but you are leaving a whole lifestyle.

I know that as you leave the military (especially if retiring with 20 or more years of service), you are mostly likely more comfortable using military jargon, terms, and acronyms than civilian terms, and often you simply do not know the civilian equivalent.

Certain terms are easy to translate into "corporate speak". For example, translate such words as "Commanded" to "Supervised" or "Directed"; "Lt. Colonel" to "CEO" or "Executive Vice President,"; and "Battalion" to "250 personnel".

Try to qualify and quantify accomplishments as often as possible: "Directed an organization with 250 personnel, supervised 12 department managers, executed an operational budget of $3M, managed assets worth $70M, and significantly reduced a logistical backlog by 87%." A short quantitative statement is successful in describing years of leadership.

Identify Your Skill Sets and Strengths

From Infantry to Logistics Management

For example, an infantryman once told me that he had been in the Army for 23 years (E-9/Command Sergeant Major), and felt he had no skills or direct value to offer corporate America.

He said he operated tanks, weapons, and dug ditches.

However, after our discussion, we determined that this Command Sergeant Major directly supervised, trained, and evaluated 40 personnel, supporting over 2,000 troops in four countries, with an inventory list of 1,500 line items, and material assets valued at $65M (including large vehicles).

His functional areas of expertise included personnel management, logistics, and operations. As he moved up the ranks, to a level of senior management, he also gained considerable responsibility for strategic planning and tactical application.

This soldier accepted a management position with a major retailer as a logistics expert with oversight supervisory responsibility for several hundred employees, and multiple warehouses in a multi-state area (he doubled his salary, and banked his military retirement pay).

From Bomb Disposal to Pharmaceutical Sales

In a different example, an Army Major / Bomb Disposal expert, decided to move into pharmaceutical sales (as a Regional Manager) when he retired.

So, we worked together to translate "Bomb Disposal expert" into "sales and marketing". We identified his leadership skills, ability as a public speaker and briefer when "selling and marketing" new programs to convince management to revise and improve processes, very savvy negotiation abilities, and skill at writing and communicating effectively.

We also focused on his experience in leading large size programs and supervising dozens of personnel while managing multi-million dollar budgets. In the final resume, there is only one line referring to his extensive knowledge as a bomb disposal expert.

In each of these examples, we translated not only individual military acronyms and terms, but also career experience and skill sets; we dug deep into each career history to identify those experiences and skills not directly related to the career field (perhaps you are designated as a recruiter for a year, an event planner, or trained in IT—you just never know), as well as those skill sets directly related to the career field.

And, of course, not every troop re-entering the civilian job market is a former Command Sergeant Major or a Major, but the training and responsibility you received in the military stand you in very good stead for the civilian world.