Great Jobs for Military Veterans in 2016 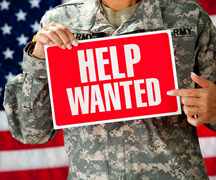 With an improving job market and new hiring initiatives, veterans and service members transitioning from military service to civilian life this year have a wide array of employment opportunities. Through 2015, the unemployment rate for United States military veterans entering the private sector workforce reached a seven-year low. The Department of Defense (DoD) reported in December that year-to-year employment gains rode an uninterrupted, 23-week streak.

Initiatives like the new partnership between USDA and Hiring Our Heroes, the White House’s Joining Forces program, and private industry organizations like HireAHero.org have helped to improve the job market for veterans. While job prospects have improved, finding potential careers is another, unique challenge. For some veterans, like former U.S. Army Airborne staff sergeant Maria Bogacki of Clarksville, Tennessee, entrepreneurship is the best path.

“To me, the 9-to-5 schedule was very difficult,” Bogacki says. “As much as most private-sector [employers] would like to help veterans, you cannot just miss work two times a week.”

Bogacki went into medical retirement after a tour in Iraq during the period the Bureau of Labor Statistics (BLS) classifies as “Gulf War II.” This particular demographic of veterans had one of the worst employment outlooks just five years ago. Just 69.1 percent of women from this group were employed from 2011 through 2013, per the U.S. Census.

For Bogacki, the highest hurdle to a post-military career path was her service-related medical situation. She circumvented this issue by starting her own business, Image One USA professional cleaning services.

Entrepreneurship could be an appealing option for veterans, in part for some of the qualities Bogacki says she cultivated in the Army. A willingness to lead and the organizational skills that are paramount to military service are central to running a successful small business.

The U.S. Department of Veterans Affairs (VA) has a one-stop Entrepreneur Portal to help veterans prepare for launching a new business.

For those opting for a more traditional career path, there are plenty of options. BLS figures suggest the best industries for transitioning veterans are professional services, which accounts for 19.8% of all veteran employment; business and finance, at 17.4%; and service industry at 14.1%.

These percentages jibe with rankings of top veterans employers around the country.

Many of these companies weigh military service equal to certification in their hiring processes. That’s important, because some career specifics can’t be taught in service. But that doesn’t mean men and women in the service can’t prep for their career choice before entering the job market.

“Start studying job requirements for desired careers prior to getting out of the military,” says Jonathan Razzano, a marketing specialist at Kennesaw State University and retired captain in the U.S. Army. “Begin studying and learning the lingo of the profession to aid in translating how certain military skills will transfer into a different field. Applicants can convert the skills learned in the military into success in that particular civilian job or career field.”

Some careers have built-in job training within military service. For example, being stationed in a foreign land and being able to speak the language provides incomparable on-the-job training for a translator.

Likewise, the training nurses received in active duty can apply to certification for registered nursing positions in some states.

Still other careers have programs tailor-made for preparing and recruiting veterans. Applicants with experience in online security are in high-demand, including information security analysts. The Wounded Warrior Cyber Combat Academy was established specifically for this purpose.

Some fields are an attractive fit for veterans because of the direct outreach to active duty personnel it provides. Financial advisor is one of the most in-demand job listings in the CareerCast Veterans database, and it’s a position that allows former servicemen and women to help current and former military personnel manage their finances.

This fits what Bogacki describes as a “sense of community” necessary for veterans to thrive in the workplace.

Servicemen and women who take advantage of post-military training programs and employment initiatives may find that 2016 is a very opportune time to find a fulfilling career.

Referencing careers tracked in our Jobs Rated report, high-employment sectors per the BLS, and top hiring companies of veterans, CareerCast.com spotlights 8 great professions for servicemen and women transitioning to the civilian workforce.

Three of the top 10 best employers according to Military Times are in the financial sector. A career in financial advisement is a great way for veterans to help active servicemen and women, as well as other veterans manage their money.