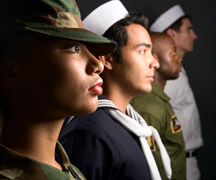 Servicemen and women dedicate years to our country, but as a result are removed from the workforce. To bridge that gap, career fairs and specialized training programs catered to military veterans provide opportunities for employment.

Companies throughout the nation have tailored their pursuits of new employees to reach out to the military community.

Home Depot has staffed over 35,000 from all branches of the United States military, and in October, increased the scope of its veteran employment with the introduction of its Mission: Transition program.

The company began actively pursuing veterans and military personnel in 2002, and Schelling says the returns have been tremendous.

“The commitment they bring…as solutions providers,” is a chief asset that veterans bring to Home Depot, according to Schelling. “We’re a solutions sales environment, and military personnel provide great solutions customer service.”

To further expand its partnership with the military community, Home Depot has representatives who have worked with the Department of Defense and National Guard to understand not only what qualifications military personnel develops while in service, but the challenges acclimating to the labor market once they return to civilian life.

The company is represented at “literally hundreds” of veteran-focused career fairs, and is beginning to host events on military bases. Home Depot also has a Skills Translator tool on its military-targeted website, homedepotmilitary.com. The Skills Translator is designed to give servicemen and women applicable job skills to list on their resume when they have been out of the job market.

Schelling says the company’s goal is to assist military job seekers find the right jobs with any company, not just Home Depot. Thanks to similar programs in other companies, there is a nearly 3% improvement in veteran unemployment since June 2011.

JPMorgan Chase added over 4,500 veterans to its payroll since late 2011, a figure the company attributes to a centralized Military Recruiting Team.

In addition to private corporations, federal and state organizations are taking an active approach to help military personnel along the career path.

The Department of Labor (DOL) is an excellent resource for finding different job placement and training programs. The DOL Veterans’ Employment and Training Services (VETS) website updates with information on training seminars around the country.

State governments are also taking proactive approaches in aiding veterans in the workforce. For example, Tennessee hosted the Paychecks for Patriots program in 13 cities across the state during October.