The Best Jobs for Veterans in 2013 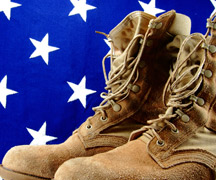 New efforts to help America’s population of active duty servicemen and women, reservists and veterans are effective and have opened up rewarding career paths in a range of fields, including information technology, manufacturing and transportation.

Both U.S. government programs and private industry are heeding the call to assist those job seekers who made the ultimate commitment to country. First Lady Michelle Obama and Dr. Jill Biden head the Joining Forces jobs initiative, which has brought together 2,000 domestic companies with the pledge of hiring 100,000 veterans, as well as the spouses of active duty military members, by the end of this year.

Of course, helping veterans reintegrate into the civilian workforce is a critical effort for the nation's economy and military. The unemployment rate for veterans is over 10% among post-9/11 enlistees, which is higher than the national rate of 7.9%, according to the U.S. Department of Labor (DOL).

Some companies have been well ahead of the curve, such as Home Depot, which launched its military employment outreach program in 2002. “Veterans are able to rally [colleagues] to accomplish the mission,” says Eric Schelling, Home Depot's Director of Talent Acquisition.

Many states are creating programs for veterans as well. When the Commonwealth of Virginia launched its Virginia Values Veterans jobs initiative, Huntington Ingalls Industries (HII) was one of the forerunners demonstrating the importance of hiring returning military personnel.

HII received recognition from the Virginia Department of Veterans for its employment of veterans at the company’s shipbuilding headquarters in Newport News, Va., which is in the center of the most highly concentrated population of service members in the country.

Citing “core values of integrity and safety,” Howell says teaming with the Armed Forces to fill its hiring pool is a winning tactic for HII. In turn, the company offers a wide range of career paths for veterans, including industrial production managers and ship engineers, but the qualities Howell cites also translate well to managerial positions, he says. The leadership and organizational skills developed in the military help those veterans qualify for positions that require team building and leadership, Howell explains.

When reviewing potential civilian careers for former members of the military, 10 positions rise above the rest for their ability to tap into the skills and traits developed by most veterans, as well as their availability in the job market. Using data from the CareerCast Jobs Rated report, here are the 10 jobs best suited for military veterans: